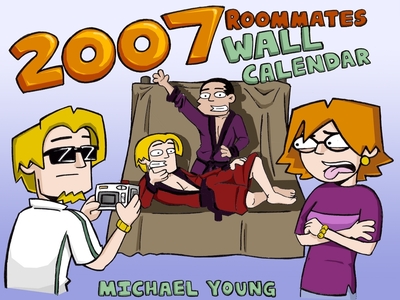 Take hold of your pants for the huge announcement of the New Year- the 2007 Calendar has finally arrived!  The copies have been all been made and are ready for distribution.

I’ve ensured that the quality of the reproductions is of a higher standard than last years’, and that more attention was given to the project as a whole.  With that, however, came an enormous printing cost, so I can’t be as generous with hand-outs this time around, with a few exceptions.  As I’ve said numerous times before, I have no desire to make profit on my work, but I’d want to cover some of what was spent.  So if you think you’d like a copy, be sure to let me know.

Release Date:  October 2006   (Hopefully within the next week or two, but definitely by the end of the month.)

Book Format.  This book’s release will be a conducted a bit differently than past releases.  I’ll be printing two versions of the comic book, in “uncensored” and “censored” formats.  The first release will be in the traditional “uncensored” comic book format, which, to me, is the way it is meant to be read.  I will assuredly have a copy on me at all times, so be sure to ask me about it.  The “censored” version is primarily for adults or anyone who is squeamish at the sight of vulgarities and innuendos, and will in turn think lower of me for using them.

This time around, I will also be putting the entire book online.  Why?  Because I have no desire to make profit on the book- I just simply want everyone and their mother to read it.  And give honest feedback.  Since I will be making a limited run of the print copies, this will be how the majority of you get to access it.

Keep posted for further announcements within the next few weeks.

Well, that’s the end.  This centerpiece ties into the full-length comic book, which embellishes this whole ongoing storyline.  Expect that in the next few months, as well as a 2007 wall calendar.  And I’m searching for a new venue to publish my work, so hopefully, at some point, we’ll see a revival of the series.

Thanks for all the support and comments on this site, for those who have continually visited.  Best of luck with all of your future endeavors.

This one wasn’t put in on Sunday because they hadn’t received it while I was away.  The finale is still scheduled for this coming Sunday, so since I already made this, I’ve decided to slap it up on the site.  You can all pride yourselves in being of the select few to have seen this comic.

Since I’m leaving for a week, you loyal readers get Sunday’s comic early.

Two more weeks, and that’s it.

Roommates
Create a free website or blog at WordPress.com.